The festivals of Tokyo: Sanno Matsuri

Tokyo is the biggest city in the world. But not only is it a vast urban zone, it is also a centre of rich and diverse cultural life mainly rooted in Japanese traditions, intertwined with history and religion as well. Perhaps the most beautiful manifestation of cultural heritage is the popularity of festivals or matsuris in Japan, which have combined cheerfulness and respect, the sublime and the profane, the old and the new for centuries. Today we’ll have a closer look at one of Tokyo’s most important festivals, Sanno Matsuri. 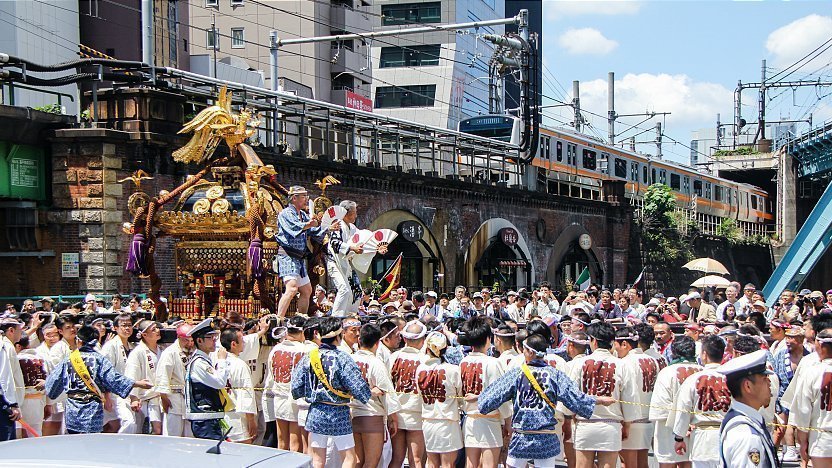 Sanno Matsuri is one of Tokyo’s three biggest festivals and also counts as one of the most significant festivals in Japan, too. It takes place in even numbered years and always in June, in turn with the Kanda festival, which takes place in odd numbered years. The origin of this matsuri goes back to the Edo-period (1603-1867), when the Tokugawa shoguns took over in Japan; this festival was meant to celebrate the new political centre of the country (that is Edo, the former name of Tokyo) and its rulers. It started out as a really big celebration but it has shrunk over the times: today’s modern city infrastructure does not really favour long processions which are the main events of most matsuris; they visit shrines and other religious venues, while carrying mikoshis that enshrine kamis (shinto deities). Since today busy roads only get partially closed because of the matsuri, it might happen that cars rush by the celebrating crowd at high speed!

Nowadays only about 500 people and modest-size festival floats take part in the religious procession which starts out at the Hie Shrine, where a large ring made out of straw is standing in the middle of the shrine grounds. Whoever walks through this ring will be purified and ready to begin the procession. The parade lasts for 9 hours and in the end it returns to the Hie Shrine, while visiting other shrines (first Yashukini and later the tiny Nihonbashe Shrine).

The most  momentuous phase of the procession is the brief visit to the Emperor’s Palace:  the head priest is allowed inside the palace, which is a rare honour, and offers his prayers to the emperor and his family.

However, during the eleven days of the Sanno Festival, the visitors can witness much more than purely religious happenings: one can listen to the sound of Sanno drums, watch a Shinto music-and-dance performance and see children parading, dressed as court pages.