Seijin No Hi, the day of young adults

As we already know, the first month of the year in Japan is paved with celebrations and festivals, shrine visits and many social occasions. One of the most important ones is Coming of Age Day, celebrated on the second Monday of the new year. Seijin No Hi is an official holiday dedicated to the citizens who are to reach (or have reached) official adulthood within the period extending from the previous and the new year’s April. Legal age in Japan is 20 years: the young people just turning (or having turned) twenty are acknowledged as fully responsible grown-ups who have left childhood behind to begin their adult life.

Coming of Age Day has been a national holiday since 1948. Newly recognized women on this day are to wear special kimonos called furisode, but these garments are extremely pricy; some of them might even cost a million yens, which discourages many young adults from commemorating the big day. Of course there is also the possibility of renting a furisode, but putting it on properly might still be  a problem. Thus hordes of young women visit beauty salons on this day to be dressed by professionals and they also get their hair done.

Boys might wear dark kimonos on Seijin No Hi, but most of them prefer to put on smart Western suits.

The new adults go to the local home office in the morning where they are greeted by government officials who give speeches and hand the young people small presents on their first day spent as full members of the society. According to tradition, they then visit  a shrine and pray, followed by family lunch and in the evening it is time for a well-deserved party in an izakaya, or Japanese pub. The young adults can at last drink legally to observe the great day. And if there is enough beer, there’s no way of knowing how far it is going… 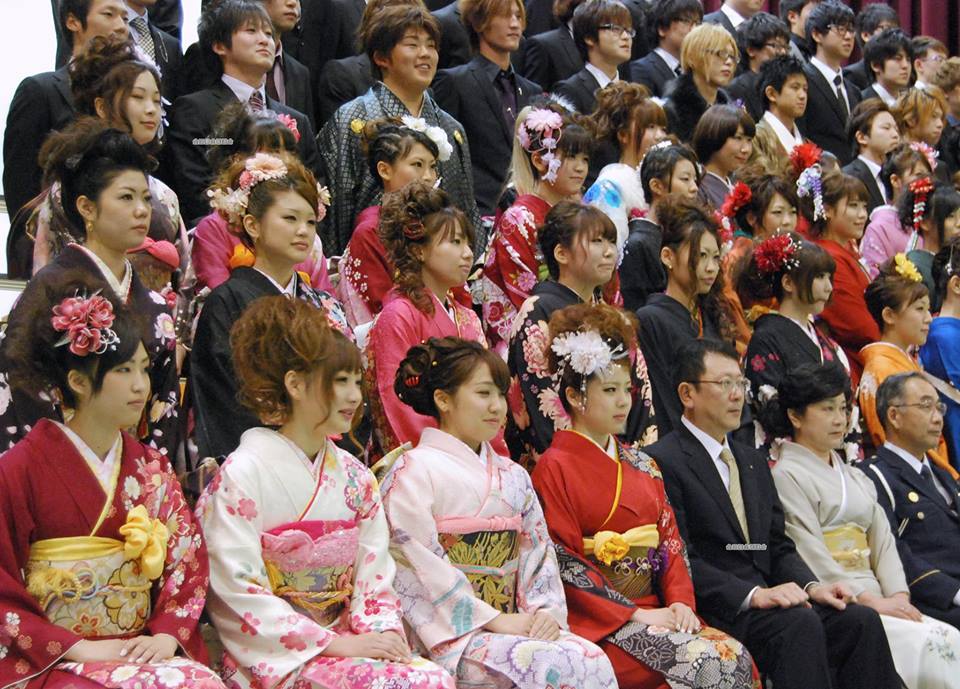 After the Millennium, the significance of the „proper” celebration of Coming of Age Day has  begun to decrease, much to the dismay of elderly people (and as we are talking about Japan, they are in fact the majority of the population), who can’t help but wonder what is wrong with youth today? They don’t even want to put on pretty dresses and get wasted? Actually, some young people have indeed revolted against the obligatory commemoration process by trying to disrupt the festivities, for example in Naha, in 2002. On top of it all, the legal age in Japan has just been lowered to 18 years, which will take effect in 2022. The kimono industry is not delighted, obviously. However, many people think that the reason behind the decline is that the young people of Japan don’t feel ready for adulthood and don’t think it should be commemorated in  a society with one of the lowest birth rates in the world.