„Over my dead body!”-fugu for beginners 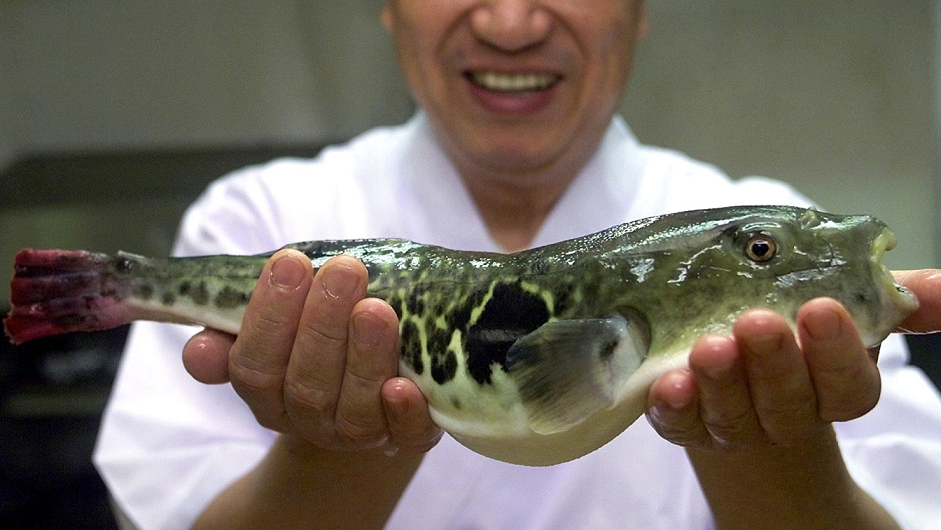 Food is fuel for life. We need it to keep our body going every day. Food is also a source of pleasure and sometimes we just can’t get enough of our favourite dishes. But then there are certain foods that neither taste so good (although you can’t argue with personal taste) nor are they essential to our health and well-being, and yet…we crave them. These foods have something in common: they are surrounded by a certain mystic atmosphere. We eat them for what they symbolize: most of the time it’s luxurious lifestyle only affordable by few that they embody, and we crave a taste of that lifestyle. Lobster or caviar fall into the cult-category, and so does (or at least did) pineapple in the short story of the famous Hungarian writer István Örkény: the narrator and his family in the 1960s can’t wait to taste the pineapple they had been planning to eat for a long time (and which has no taste in the end). It is not the actual taste: it’s more like the taste of a whole new world that we are after.

But what if a food is so special that it can kill you? Let’s find out about Japan’s number one cult-fish: fugu, or blowfish. 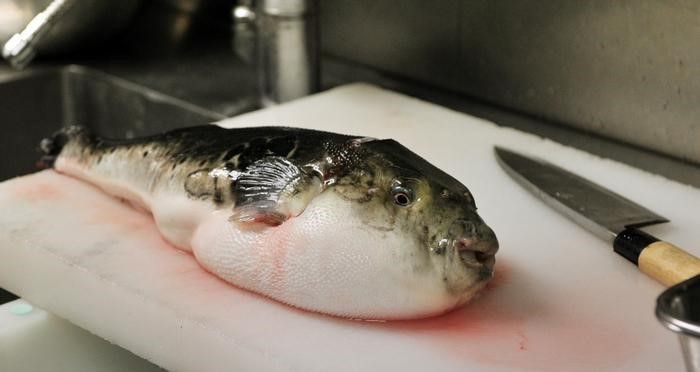 The word fugu itself means „riverfish” and refers to more than one species. It’s appearance is awfully cute, which is quite contrary to what is inside: this fish is packed with a neurotoxin called tetrodotoxin, produced by certain bacteria that live in the blowfish’s guts. Actually, its toxicity begins on the outside; the skin, inner organs (and most significantly the liver) and the guts are full of the poison which is much worse than cyanide and the tiniest amount can kill a human being. Evoultion made it possible for the blowfish to survive its own toxicity and also made sure that the natural enemies of fugu think twice before feasting on them. But it certainly couldn’t keep humans from catching and eating them. Let alone Japanese people…they are doing it for the thrill of risking their life. However, if you are so thrilled that your tongue is getting numb while eating fugu, it can mean two things: 1. the skillful chef prepared your fugu in a way that the toxins hardly affect you, but you can still feel a hint of them 2. the lousy chef did  a bad job and this will be your last supper. If it is the latter case, then you will die a slow and horrible death as all the muscles in your body paralyze but your mind is alert the whole time. In the end asphyxiation will be the cause of death.

It is safe to say that if you decide on eating fugu, you put your life in the hands of the chef. However, it is reassuring that the training of a fugu chef lasts for 2 or 3 years, with a very difficult exam to be taken at the end: the written part is a two-hour test ont he anatomy of fugu species, followed by the preparation of a blowfish-meal in 20 minutes;  this includes the candidate’s tasting his/her own product. The average of successful exams is 35%; of course it doesn’t mean that the rest of the candidates die because of their own poisonous sushi. It’s just that there is immense psychic stress and one mistake is enough to fail the exam. Fair enough: people’s lives are at stake.

Blowfish is mostly prepared raw (since toxins are resistant to cooking), with some soy-based sauce on top, arranged in the shape of a chrysanthemum or a crane. These two obviously have to do with death: the former is the flower of death and the latter grants the consumer good fortune…which is much needed when eating fugu. However, restaurant poisonings are very rare, thanks to the strict rules and precautions and the high quality training of chefs. Furthermore, they have come up with fugu that is grown in a non-toxic environment and is safe to eat. Of course, the thrill is gone in this case!

Finally, I would encourage everyone to taste fugu at Sushi Sei……that is, if they had fugu on the menu. Luckily–or unfortunately?–fugu is not permitted for sale in the European Union.

So we have to resign to eating totally safe and beautiful, tasty dishes in the heart of Óbuda!