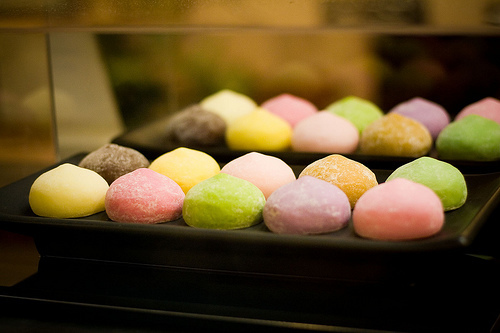 Smooth on the outside, sticky on the inside. Solid but soft. Taste it but beware: you might choke on it…what could it be? Before starting a guessing game, I might as well let the cat out of the bag: it is mochi, the most famous Japanese dessert I’m talking about. Although mostly consumed at New Year’s Eve, mochi is popular throughout the year; shapes and flavours vary according to the occasion. But what is it made of? And how? 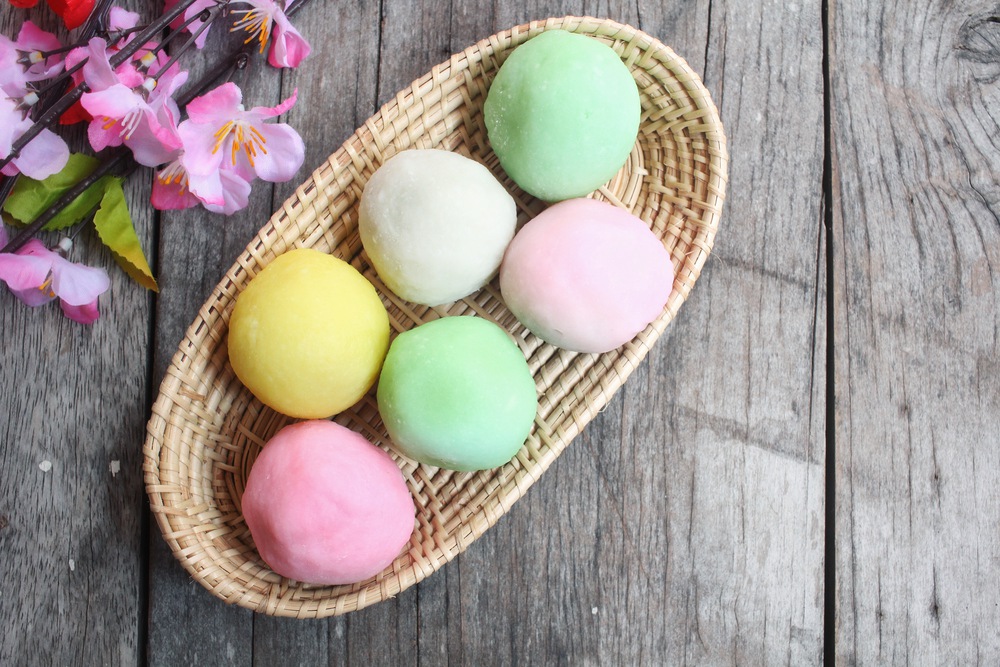 Ingredients and a bit of chemistry

Traditional mochi–much to my surprise–is made of only three ingredients: rice, water and air. The most significant factor is the quality of the rice: mochi is made from short grain mochigome rice, which differs from long grain rice in two important aspects: the starch it contains is rich in amylopectin and low in amylose. Don’t worry, I’m not going to disclose a detailed explanation of the chemical process, but what it all comes down to is that this rice tends to turn into a jelly-like substance when boiled (or rather, heated over steam), which is ideal for making mochi.

So much about rice. But what’s water and air got to do with it?

The actual making of the traditional mochi dough is the most interesting (and physically demanding) task of the whole process. The procedure itself is called mochitsuki and it needs two strong men; after pouring the dough into a big bowl, one of them starts beating it with a large hammer-like tool called a kine (yes, literally beating, not whisking or stirring), while the other one keeps turning the dough carefully. By this, air bubbles are „beaten” into the dough and this will contribute to the final texture of the mochi. The boys need to be alert, though: rhythm is of essence when making mochi, so as not to hit our partner’s hand with the kine. It could be painful. They also add water to the dough so it won’t stick to the bowl. When the texture is right, the mochi gains its final shape, which is mostly round or rhombus-shaped. Flavours and colourings along with fillings are done at the very end of the process.

Almost every year there are tragic news about people who suffocated to death at New Year’s Eve in Japan. They say mochi is the „culprit” but I would beg to differ: eating mochi can be dangerous only if you do it haphazardly, in big bites. And being drunk –which is often the case at New Year’s Eve–certainly won’t help. Amongst other things you shouldn’t do if you have been drinking alcohol (like driving a car or confessing your true feelings to a future romantic partner), I think eating mochi while drunk is definitely a bad, or sometimes even lethal, idea.